If you wondered why George St was lined with hundreds of people, some of which dressed in provocative clothing, marching, chanting and yielding posts, then you have witnessed Dunedin’s second ‘Slutwalk’ which took place on Saturday.

‘Slutwalk’ is a world-wide protest adopted recently in New Zealand, to raise awareness about sexual-abuse, rape and victim blaming with a clear message that no-one deserves to be raped.

Protesters gathered at the Dental school, once the roads were closed, woman men and children marched down Fredderick St and up George St chanting “slut, skank, slag or ho, whatever you call me, no means no”

In the Octagon, the rally heard from the national co-ordinator of Rape Crisis, Georgia Knowles, Rebecca Stringer, a gender studies lecturer who has studied the politics of victimhood, and Ken Clearwater, of the Male Survivors of Sexual Abuse group.

Rape Crisis national co-ordinator, Georgia Knowles, says they are reclaiming the word slut which can be uncomfortable for some people, it is used to police women and justify sexual violence contributing to a culture of victim-blaming.

“What breaks my heart is when this attitude is internalised, when survivors believe that they were to blame” she said.

Georgia says sexy clothing was certainly not compulsory for the rally, but many choose to exercise their right to wear whatever they want in defiance of archaic stereotypes.

“We are forced to point out the obvious, we have to. Like No means No, Clothing is not consent. Clothes don’t rape, it’s a dress not a yes.” She says.

“Our patriarchal society places the blame on the victim rather than the perpetrator.  As a society we need to stop men raping, not stop women from being raped. The focus of the ‘Slutwalk’ is to emphasise a person’s right to be free from violence, regardless of what they wear or how they act.”

This sparked a huge outcry against putting blame on victims instead of the perpetrators.

SlutWalk protest marches began on April 3, 2011, in Toronto, Canada, with subsequent rallies occurring globally even in places such as India.

The officer who made the comments, Constable Michael Sanguinetti, later apologized for the remark saying: “I am embarrassed by the comment I made and it shall not be repeated.”

He was disciplined but remained on duty.

One in three women in New Zealand experience physical or sexual violence from a partner in their lifetime.

Young people aged 15 to 24 are more at risk of physical, psychological and sexual victimisation than any other age group.

One in three females and one in six males were sexually abused before the age of 18.

Between 33 to 39% of New Zealand women experience physical or sexual violence from an intimate partner in their lifetime.

You can ring Rape Crisis Dunedin if something is happening in your life now, or if you are struggling with something that happened in your past. We offer you over the phone support, one to one counselling or a therapy group. All these services are free of charge. 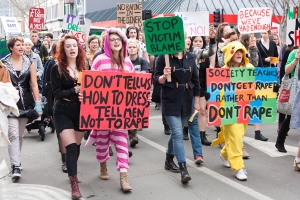 300 people marched down George St in protest against sexual violence.

One thought on “Slut Walk sends a strong message”